A few weeks ago I had some more wool delivered and decided to mix the colours up a bit, I always like a change every now and then. Here are the new colour combinations. 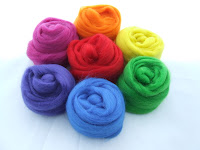 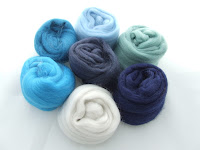 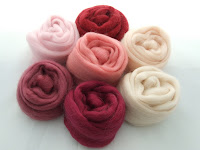 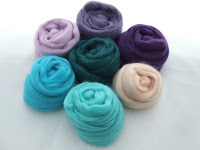 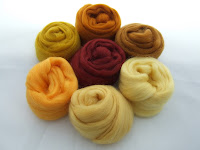 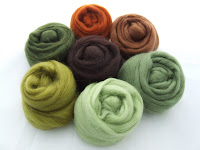 I also bought a pop up light tent from ebay, to try and photograph the colours more accurately. Seems to work. I'm just waiting for my husband to load them up onto the website. In the meantime I listed them on ebay and etsy. I was surprised that after being listed for just a day on etsy they seemed to be selling well, (my etsy sales are normally a slow trickle). I was also a bit flummoxed as to why my hearts had dramatically increased over night. The mystery was solved when I realised I'd been included on a treasury that had made it to the front page! Unfortunately I was tucked up in bed when this happened so I missed my debut, but it was still exciting.

There's a new craft blog I'm reading called driftwood, written by a student from one of my workshops. She's only just begun blogging recently but it's full of crafting endeavors of her and her children. Well worth a visit.
Posted by Fibrespace at 9:59 am 2 comments:

I'm back! We had a great week, Ireland is such a beautiful place, we were staying in Killarney in Kerry, where the mountainous landscape is breath taking. This is the gap of Dunloe. 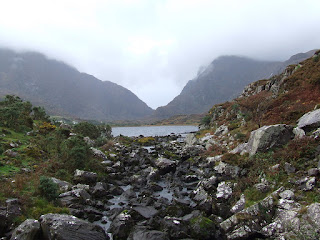 Just before we went I managed 45 minutes at the bead fair in Harrogate, my husband was waiting outside with the kids in the car, all packed and ready to go. I bought lots and lots of beautiful glass beads, and have already begun using them. Here are my latest necklaces to go into the Etsy shop. 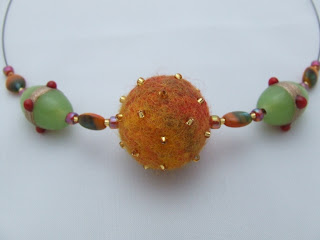 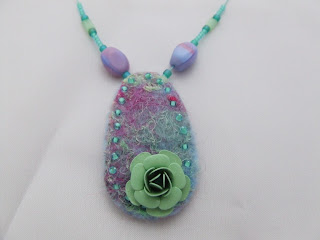 I would have made more but I was out last night, I went to see Rufus Wainwright with a friend. Bit strange going to a seated gig, but it was very good, not so keen on the Judy Garland stuff, but the songs from his latest album were great.
Posted by Fibrespace at 5:17 pm 2 comments:

I should be packing at this moment, we're off to Ireland to stay with family for the half term. I just wanted to show you a bag I made as a birthday present for my daughter's best friend. You'll see from the photographs that I've made two bags from one piece of felt so I can make my daughter one as well. I haven't finished the second one yet, but I think I'll make it slightly different. 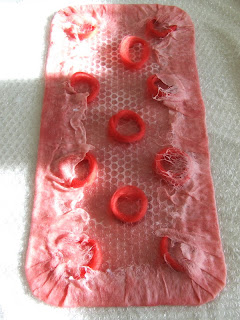 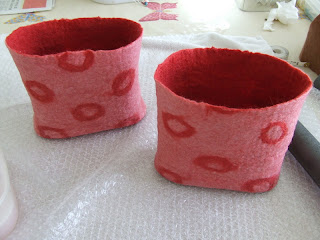 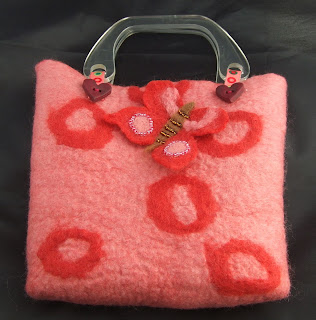 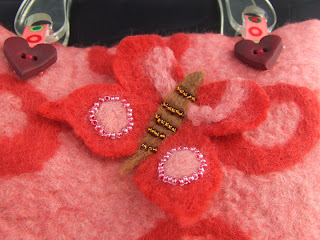 Over the years I have been collecting 100% wool jumpers from local jumble sales, I used to make them into bags, but became a little fed up as the style and shape of the jumper would dictate the design of the bag, and I like to start with the design of the bag first. I think that made sense? Any how, I stopped making bags but still have lots of jumpers, so every now and then I try to utilise them. Most efforts have been unsuccessful, and abandoned, but over the last few days I have created this. 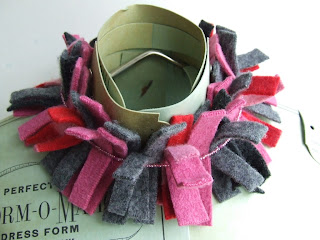 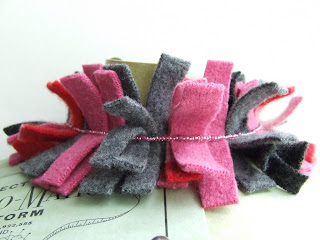 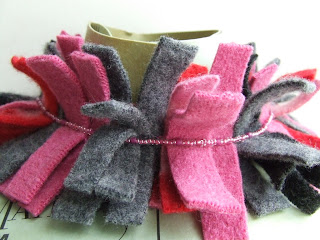 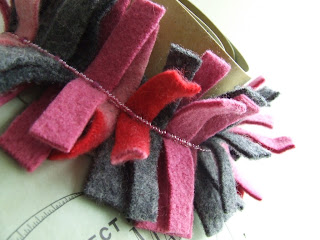 My inspiration was from a book (sorry, can't remember what it was called) I flicked through at one of the shows. It suggested sewing strips of felted jumpers onto yarn and then knitting with it. I've gone a bit off knitting at the mo, so I just sewed some strips together in layers to build up a lovely textured choker. The beads were an after thought, to hide the stitching. I guess it's a cross between a scarf and choker. An item of jewellery that can also keep you snug in winter. I'm keeping this one for myself, because apart from loving it, it is slightly flawed (because I was making it up as I went along). However, I have ideas for improving the design, so I may get to use some of those old jumpers after all, and create a little more storage space for my ever growing craft supplies.

How frustrating, blogger's not uploading photographs again! I'll have to save and post later. Best get some stuff listed on Etsy before I pick up the kids.

At last, blogger is working. I've managed to add three new pieces to etsy, which I'll blog later, and I reckon I've just got time for an uninterrupted cup of tea before the school run.
Posted by Fibrespace at 1:40 pm 2 comments:

Here are the bags and flowers made by the students on the workshop. That is if blogger is working yet, it wouldn't let me upload photos earlier, so here goes. 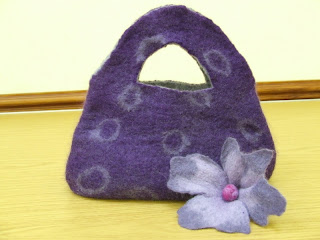 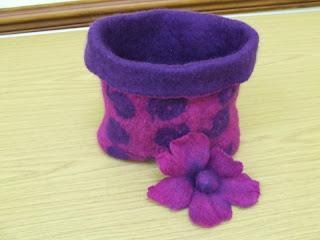 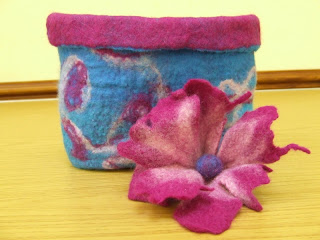 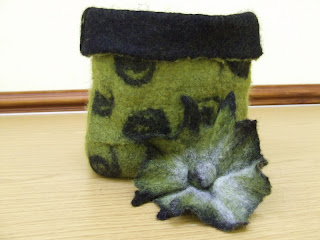 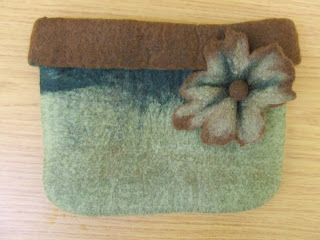 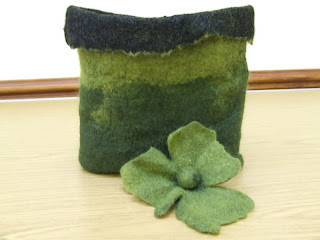 Yay, it worked! Aren't they fantastic, they made straps as well, but were attaching these at home as all the bags were a bit wet, as you might imagine.
Posted by Fibrespace at 4:14 pm 1 comment:

Yay, I have been featured on two blogs this week!! One of my little owl purses (which has now sold) was featured on Mixed Plate, a fantastic blog that showcases original craft and design pieces. I was also on Lily and Tulip, a lovely blog that shares a wide range of craft and design shops, many of them Etsy. A great starting point if you are looking for original Christmas gifts!

Now I must apologize for the lack of posts around here. In my defence, I have been a busy bee. Last week I went to the Fashion, Embroidery and Stitch show at Harrogate's North Yorkshire Showground. I've been going for years, but thought it was a little disappointing this time, there didn't seem to be as much work on display as normal, but I did stock up on a lot of jewellery equipment and findings , so I can make new things for my Etsy shop. I also purchased some beautiful pure wool fabric, that is going to make fantastic handbags (I just know it!). The frustrating thing is I've had all these exciting buys for a week now, but haven't had the time to get stuck in and use them, torture!!

Last weekend, my husband and I did a joint project! I'd had a note the week before from pre-school, stating that J was going to be a tractor in the Harvest festival, and could I provide the costume! I think we rose to the challenge, he looked very cute! 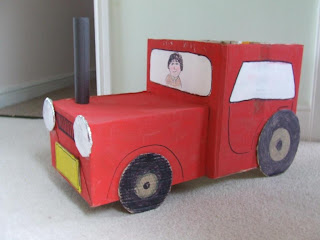 It's party season around here at the moment, so I made another little bag and pencil case. I seem to have started something now! 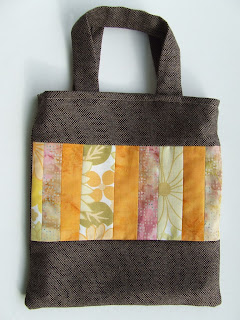 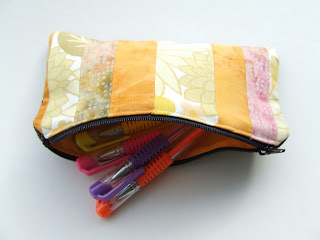 I have also ordered a load more wool this week, I'm putting together some new colour combinations for my 100g packs of wool. Just waiting for the light tent I bought on ebay to arrive so I can get decent photographs of them, then they'll be listed in the shop on the website. It is so difficult to accurately capture the colour of wool fibres!!

We went to see a gig as well The Hoosiers, at Leeds Uni, I was a student there about 10 years ago - that makes me sound so old :( , so it was quite strange going back, the union building where the gig was has completely changed, it's much more up market now. The gig was a little disappointing really, but the support band Grace were good.

My busy week ended yesterday with my Felt a Bag workshop. It went really well and I've taken photographs of all the bags. I'll post them later when I've uploaded them. I have nothing penciled in for next week, so hopefully I can begin crafting again.
Posted by Fibrespace at 9:41 am 1 comment:

Getting a bit addicted to the Etsy treasury!! I managed to bag one today, so I picked some really fantastic felted items, please go and check them out before my list ends. Thanks

Oh I'm having so much fun with my new toy (the gocco)! I printed some t-shirts, and made some sweet little purses. The first purse ended up a bit skew whiff, so it now belongs to me, it's perfect for keeping my iPod Nano in - another new toy I got for my Birthday :D

I eventually got the hang of sewing a zip in straight so made two for my Etsy shop. They've just gone in today. 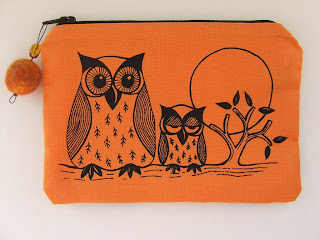 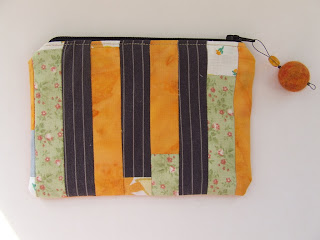 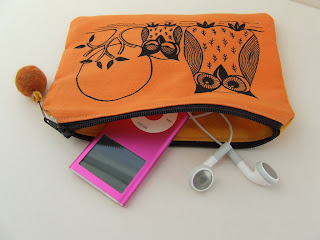 (of course I had to include a felt bead)

And I made another treasury list, my owl bag is here, thanks cottonbop.

Now I have two screens left that came with the kit, one for paper and one for fabric, problem is I have to many ideas buzzing inside my head, I'm just going to have to buy more screens pretty sharpish!

I have also been felting today, I'm making a winter wonderland vase, but it's not finished yet. Watch this space!!
Posted by Fibrespace at 7:49 pm 2 comments: 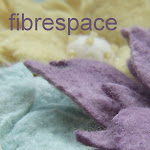